Citizens and the economy: Two faces, the same coin

Concepts such as Gross Domestic Product (GDP), Value Added (VA), Foreign Direct Investment (FDI), or Exchange Rates (ER) are usually blamed on issues in which citizens do not participate. However, this reasoning is entirely misleading as these and all the components of the economy are derived from our daily acting.

Both the supply and demand of products assign a market price to each good or service under the assumption of a free market and perfect competition. This can be observed through the purchase of food and other goods at nearby supermarkets and grocery stores. That is why the prices of some products tend to rise or fall. They are determined according to variations in supply and demand.

Sellers assign a higher value than the original cost to each product as they seek to compensate for the contribution they gave to the good. The latter is the VA. And now, GDP has already been formed when final goods or services were produced.

Free people daily generate their economy. Unfortunately, although economics concepts are linked with us, sometimes we may perceive them as very distant. I invite you to reflect differently when listening to news regarding the economy, and to observe the citizen-side behind every one of the things you hear or read about.

Your freedom is the economic power of your country!

To wall or not to wall? What’s behind it for Trump in the USA economy?

I am writing this article to express some points on a topic that has been constantly mentioned about a proposal made by Donald Trump, the Republican candidate for the presidency of the United States. His idea is to build a wall on the USA-Mexico border to stop illegal traffic of guns, drugs, and people; and deport illegal immigrants. Nevertheless, some fundamental economic implications are not being explained entirely in the news that I aim to clarify here.

This work is composed of four sections. First, you will find basic Economics about the demand and supply of normal goods and services. In the second section, I will put on the table some necessary assumptions and implications derived from a simple analysis. In the third section, I tackle the main question and add some proposals. In the end, I present some personal comments.

The demand and supply curves are all the possible demanded or supplied quantities of a particular good or service at different levels of prices. These two curves intersect in a point (the equilibrium point), with both unique equilibrium quantity and price (see Figure 1). 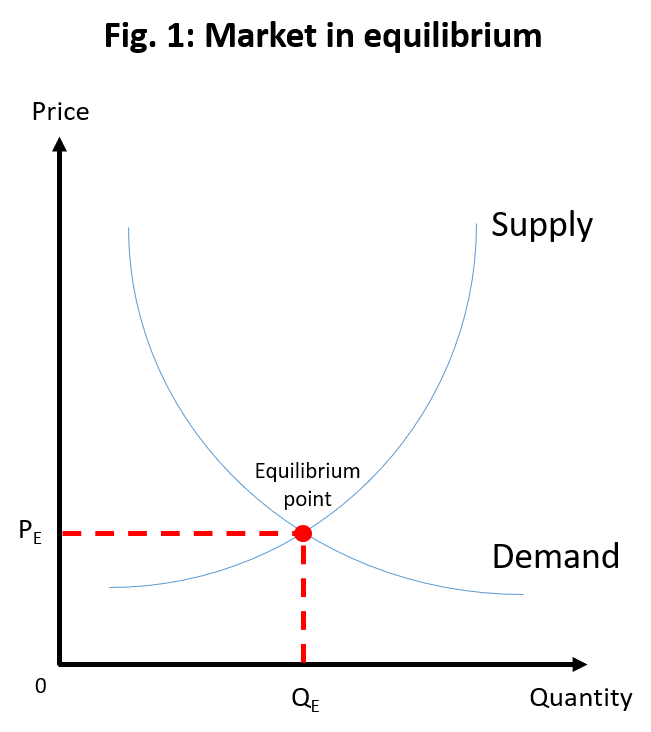 Both supply and demand curves can increase or decrease, moving the equilibrium point and the equilibrium quantity and price. All possible individuals movements on either demand or supply are shown in Figure 2. 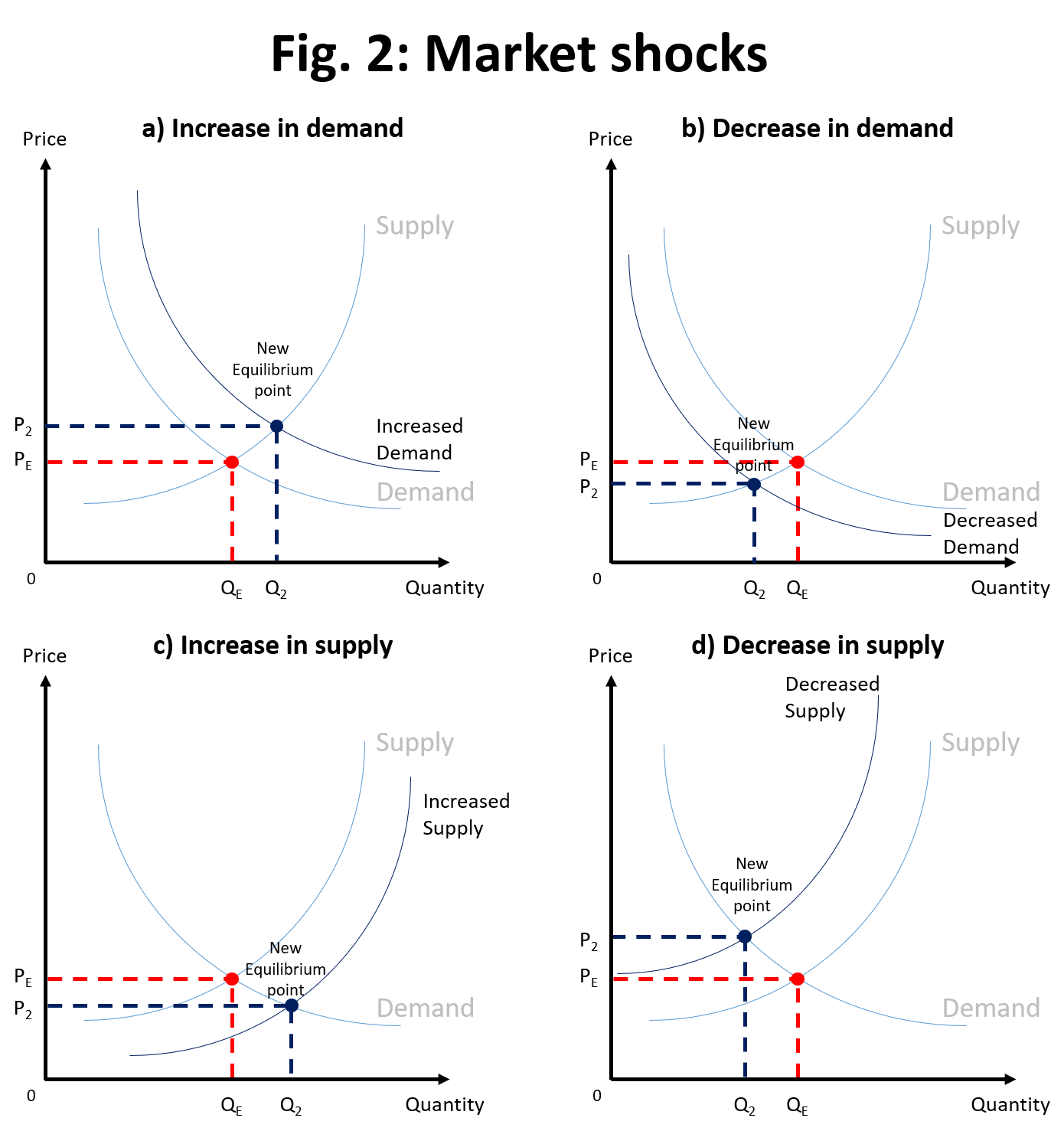 I am going to refer to the previous figures, hereon, when it becomes necessary.

Before starting with the implications of building a wall, it is essential to establish some assumptions.

These assumptions are to simplify the analysis of Trump’s proposal.

We all already know these assumptions are neither entirely true nor entirely false.

At this moment, markets are in equilibrium. There is no problem to care about.

The supply of guns, drugs, and people increases in their respective markets (see Fig. 2c). Therefore, a first overall effect is that under the presence of illegal traffic without having built the wall, there will be a lower equilibrium price and a higher quantity at each market. In other words:

Yes, the pattern is easy to be followed.

Subsequently, some fundamental issues may arise:

After the wall has been built, there is no illegal traffic of guns, drugs, and people anymore, and immigrants have been deported. Thus, the supply of guns, drug, and people decreases on their respective markets (see Fig. 2d). The first overall effect is that under the absence of illegal traffic the price of the product in which illegal immigrant people were hired are going to increase (and the price of other goods since some of these products are inputs in the production of others) and a lower quantity of each of them is going to be available. In other words:

Regardless of the "obvious" benefits that a wall in the USA-Mexico border and deporting people may “give” to the USA economy, there are some relevant points that need to be taken into consideration seriously.

To wall? I don’t think it is a good idea.

If what USA people want is to reduce problems related to employment and national security, then the wall proposal of the Republican candidate is not the best call. Otherwise, if more jobs and security are wanted, I present some general recommendations to make America (the continent, not the country) great.

The fact that Trump offends and generalizes negative aspects of Mexican people does not offend me. I know that all countries have these problems and that he is just trying to call the attention of media and news. He knows he can win the elections with votes. Then, he is trying to gain the electorate’s preference regardless of his jargon and unsoundness proposals.

We live in democratic countries, and we must focus our votes on the soundness of the proposals presented during the candidates' campaign. Specifically, we should analyze the quality of candidates' proposals and vote for the candidate with the most beneficial plan for the country and us.

Being a president is not a position of absolute power. Presidents need to work as a team with congress, other ministries, and other countries. Then, it is just a matter of logic that there are many benefits of having good national and international relationships. And, overall, it is a matter of common sense that dialogue and peace should guide candidates’ speeches.

I appreciate the time you spent reading this since it is the first article on my blog. Please do not hesitate to share your thoughts with me.

In Mexico, almost 30 million people work in the informal sector, according to INEGI's official data. Therefore, they have no access to social security nor to legal benefits. And, what do you think? they do not pay taxes. Whatsoever, they use public goods at the expense of those who pay taxes as the law indicates. Is this situation fair? I'll leave the answer to your criteria.

The thing I will not let floating on the air is the fact that if we want our government to function properly and responsibly, then we must do the same. We must be responsible citizens, pay taxes as we must, give our employees the legal benefits they deserve, and critically choose our leaders.

Government, at any level, is or at least should be, a group of people representing their citizens. Therefore, to generate public goods shared public responsibilities are needed. From this fact arises the concept of public revenue. We, together, provide a certain proportion of our money in the form of taxes to create public goods. Parks, streets, lighting, utilities, among other assets arise from what we pay to the Government.

So, why, if we want quality public goods, we do not want to pay taxes? It may be due to some civil unrest that originated when rulers do not exercise public spending correctly. Nevertheless, that does not relieve us from paying our taxes nor of being responsible citizens in our daily acting.

*** This is a translation of a published article in Monterrey's ABC Journal on September 28, 2016.

Mexico's presidential elections: What about candidates and political parties?

Mexican political parties use to choose their presidential candidates either by direct nomination (what in Mexico is used to be called "dedazo") or by a primary election (with participation of the party followers). However, most of the parties in Mexico during the last three presidential elections have fallen into a sticky trap. They have chosen popular candidates instead of the best to take the charge; hence both the parties and the elected candidates have earned bad reputation.

Beside this, we can generalize political parties choose any mix of controllability, popularity, and preparedness for the charge to choose their candidates. The first is related on how easy is for the party to control the candidate's decisions in case of elected as president is. Popularity stands for the reputation the candidate has with voters and private groups. And the third feature is based on the professional experience and how well-skilled the candidate is for the position. Since this decision is supposed to be passed for fair elections it is often also influenced by polls on people's perception about preliminary lists of possible candidates.

Subsequently, we can notice the way parties chose candidates has not been always reflected in prominent results for the country. Thus, citizens' trust in political parties have drastically fallen and it is a matter of time for parties to change their recipe on how they choose their presidential candidates.

Nowadays, it is possible to identify two different types of candidates in Mexico; the popular and the more prepared. Meanwhile, the third one is going to be chosen on a sort of alliance of some relatively "disadvantaged" political parties which does not decide yet who to choose for candidacy nor the method for choosing (either by “dedazo” or by primary election).

Unfortunately, this is not always crystal clear for voters and political parties. Undoubtedly, we will realize, after next July election's results, whether people still prefer popularity and false promises or they are ready to choose the more prepared candidate to be the new Mexico’s president.